Get an up-close look at our region's early frontier culture history. Explore Park is home to dozens of relocated 18th and 19th century buildings taken piece by piece from their original locations. The public is welcome to explore the trails leading through this area, although admission to the buildings is currently unavailable. The historic Mountain Union Church may be rented for weddings or other special events by calling (540) 777-6326.

By 1850, thousands had traveled the Great Wagon Road to settle the Appalachian region, yet road conditions remained deplorable and deteriorated the farther south one traveled. Wagons were in constant need of repair, and the skills of a blacksmith were in great demand. Providing the services of a modern-day service station, the blacksmith kept the wagons rolling.

This home was originally built in 1837 at the intersection of what is now Ogden Road and Colonial Avenue in Roanoke County. A family of six - Samuel and Elizabeth Hofauger and their four children - lived here. Samuel was of German descent and Elizabeth was of English descent. This house is what most middle-class farm families lived in in this area in the mid-19th century. The farm where this house came from was an 80-acre farm where 40 acres were actively farmed. The family did not own slaves, so it was just the six of them to run the farm. Their largest crop was corn, which was used to feed the farm animals and the family. It was also processed into corn meal. Their main cash crop was wheat. In the mid-19th century, the Valley of Virginia was known as the bread basket of the United States because much of the wheat for the country was produced here. Of course, that changed when the Midwest was settled and the wheat production moved there. The Hofauger Family owned quite a few farm animals: geese, chickens, three horses, five cows, 17 sheep, and 22 pigs. The main room of the house is the parlor and parent’s bedroom. Upstairs, over the parlor, is where the four children slept.The other room downstairs is the kitchen where you have to have a fire built EVERY day if you wanted food to eat. Above the kitchen is the attic, which has no window and no fireplace. It was mainly used as a storage area. Two of the outbuildings are original to the farm: the corncrib to the rear of the house and the storehouse/root cellar to the side.

The German double-crib “bank barn” represents a highly specialized form of architecture. This barn served the needs of the Houtz family’s large-scale commercial farming operation on Mason’s Creek near present day Salem, VA. Barns of this type may still be seen in Pennsylvania and throughout the Shenandoah Valley.

This original one-room schoolhouse was first located near a ford of the Blackwater River in Franklin County. Presently, that site is a housing development on Smith Mountain Lake. The school was moved to Explore Park courtesy of a descendant of one of the former teachers. This style of school architecture –one room with four windows and heated by a fireplace – is the norm for the county. In 1850, there is no central state authority supervising and dictating school operations or policies. Rural schools, like this one, are owned by the parents who build them. Regulation is at the lowest level possible. Kindergartens, middle schools, high schools, and community colleges do not exist in this state. There are no report cards. First grade and all the other grades do not exist. Attendance is not mandatory; it is up to the parents to decide when and if their children attend school. Curriculum and daily routines vary from school to school. How one school does things might be different from another school. In a farming community, the crop season largely determines the school year. The predominant crop in Franklin County is tobacco – a labor-intensive crop to grow and one which will cut into the time available to attend school. Attendance will fluctuate according to the crop season and according to the decisions of the parents who determine their children’s priorities. The one-room, one-teacher schoolhouse served as the predominant educational environment for American children at least through the early 1920s.

This 1755 replica log cabin was built as a set for the feature length motion picture, “Alone Yet Not Alone”, released in 2014. The movie was filmed primarily at Virginia’s Explore Park in 2010 and is a true historical account of Pennsylvania settlers, the Leininger Family and sisters, Barbara and Regina Leininger, during the French and Indian War. On October 16, 1755, a band of Indians, led by Allegheny warriors, stormed through Buffalo Valley, burned the Leiningers’ log cabin, and captured the sisters. Few survived the Penn’s Creek Massacre and even fewer lived to tell the story. Regina makes a promise to her older sister just before they are unwillingly separated—each to endure different fates.

Slone’s grist mill was built between 1880 and 1890 in the Turner’s Creek section of Franklin County, VA, on the Pigg River by the Slone family. Esom Slone owned this mill until his death in 1909 when the ownership passed to his two sons. The mill passed out of the family but was still in operation until 1952. Restoration, which began in 1996, has entailed replicating many 19th century mill components -including a new waterwheel and elevated sluice box.

In 1808, George Etslor (Etzler) conveyed to trustees of the Mountain Union Church one acre of land “for the preaching of the gospel and the education of youth.”This one acre of a 185-tract granted to Etslor in 1798 by patent would also be “…for the use of a schoolhouse and meeting house for every denomination of Christians whereon the schoolhouse now stands…” Such a specific charge characterizes the dedication and zeal with which the early residents of Botetourt County, Virginia, approached their collective spiritual well being.

The early religious history of Botetourt County is one of constant movement. Many groups – Lutherans, Presbyterians, Methodists, and Baptists – worshipped here. The designation as a “union” church is characteristic of rural nineteenth century American churches. The various religious groups represented in the community shared the responsibility of providing spiritual worship on alternating Sabbath days. This required ministers and preachers of union congregations to ride “circuits” comprised of several churches each, commonly completing one circuit every four or five weeks. Early documents refer to “tombstone schools” – a name possibly derived from the churches’ frequent use as an educational center and their close proximity to the adjacent graveyards. The church was located at the juncture of old Blacksburg Road (State Secondary Road No. 630) and Catawba Road (State Secondary Road No. 665) in the Haymaker area of Botetourt County. It was built in the Neoclassical or Greek revival style and reflects a meetinghouse form of architecture. 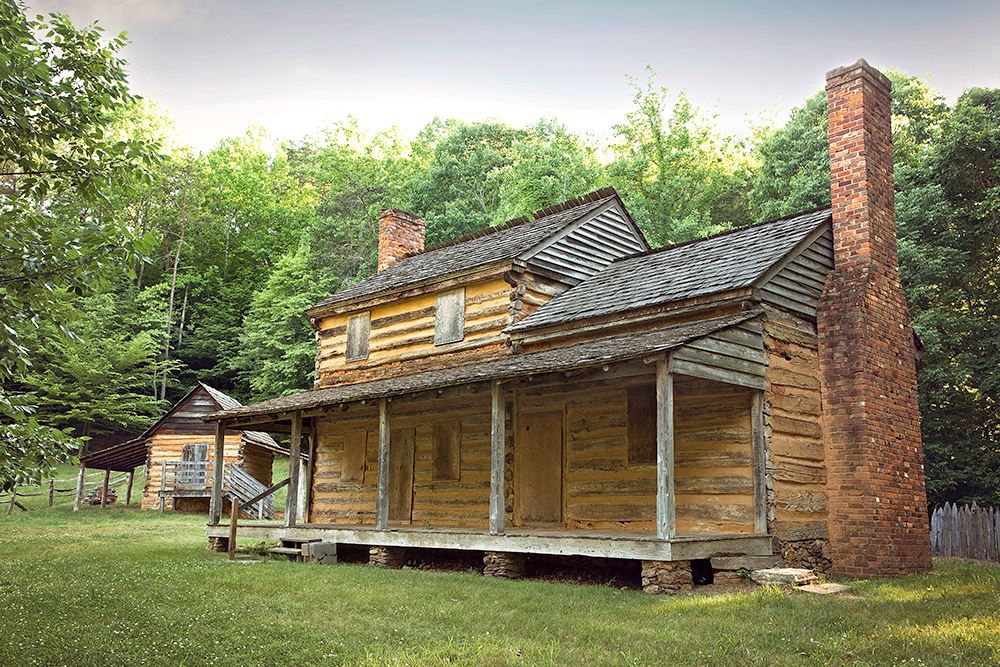